The most dangerous negotiation is the one you don’t know you’re in.

If you’re stuck in a bad faith negotiation, what you think is in play, and the gains your counterpart thinks are in play, are not the same. This is the perfect time to roll out a good “I” message, a negotiation tool that helps you draw a line in the sand and confront someone without seeming confrontational.

In these scenarios, confrontation is most definitely in order. But being outwardly confrontational is a major turnoff. To get to where you want, you need to figure out how to confront without being confrontational.

You need to highlight the problem and the impact it is having on your negotiation. Confrontation, after all, is defined as a “focused comparison”.

Here, the “I” message is the perfect tool to do exactly that. It consists of three parts:

No. 3 — Citing the consequences that seem to fly in the face of what the counterpart is trying to accomplish: “Because it ... ”

Putting it all together: When you slam the phone down, I feel like this deal will never be made because it doesn’t seem like you’re in the mood to move forward amicably. 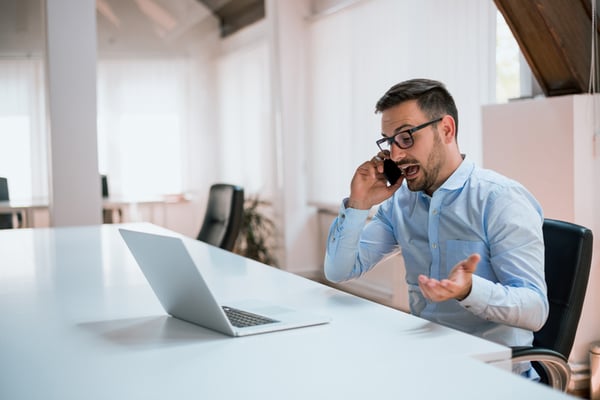 The “I” Message in Action

Several years ago, a client described a situation to us—a bad faith negotiation. Every time this individual communicated with their counterpart, their counterpart called them names or made ridiculous accusations against them.

The client was totally thrown off by this behavior, which ended up thoroughly derailing their talks. Still, at the same time, it was in their counterpart’s company’s interest to consummate a deal.

After a little bit of digging, the client found out that the bad-behavior party on the other side had held 10 jobs as a negotiator in 11 years.

Here’s the “I” message that would have been appropriate: When all you do is call us names and make accusations, I feel like we are wasting our time because it stops us from talking with you and working out a solution.

Another variation for good measure: When all you do is call us names and make accusations, I feel we are wasting our time because it stops us from getting a deal done.

It is, however, guaranteed to give you the best chance of success—and without inflaming the situation or making things worse.

When the other side’s actions are the obstruction to progress, it’s appropriate to point that out. And the “I” message is a fair and legitimate way to do that. It’s also the most palatable way to do it!

An “I” Message Misses the Mark—But Works as Intended

After all, you need a fallback position in case you’ve misunderstood the scenario and are reading the situation incorrectly.

I’ve done it before, and you probably will, too.

In a recent email negotiation, I used an “I” message to confront my counterpart about a clause in a contract I didn’t like. The counterpart had a history of being especially quick to react with escalation and anger, so I thought the “I” message would do the trick.

When you tell me something different than what’s written in the legal document, I feel I am wasting my time because the courts will uphold what the document actually says.

As it turns out, there was another portion of the contract that addressed my concerns. I just happened to miss that part. Not to worry: The response I got simply drew my attention to that section in a polite manner. The conversation continued.

Focused comparisons are the keys to confronting without being confrontational. “I” messages are a great tool for doing so with integrity.

Give it a try the next time you’re stuck in a bad faith negotiation. I’d venture to guess that the “I” message will help you get through to the other side.