The 4 Defining Characteristics of Effective Leadership

Anyone can be a leader. But not every leader is an effective one.

Great organizations are built on the backs of effective leadership. That’s because effective leaders inspire their teams to reach their full potential and can even get them excited to show up to the office every day.

If you’re looking to take your leadership skills to the next level, here are four characteristics that effective leaders possess. 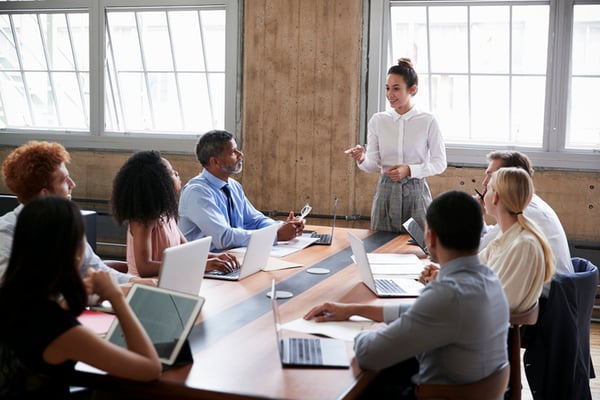 Many leaders are so focused on getting what they want that they don’t consider how their actions and requests might affect their employees.

For example, a manager might dump a massive project on an employee’s already-full plate at the last minute—without considering how that might impact their personal life. Maybe the employee’s daughter is celebrating her 10th birthday, and the family had a special celebration planned. All of a sudden, the employee has a massive new responsibility to take care of—which could cause them to miss at least some of that celebration.

Effective leaders, on the other hand, treat their teams as people first and employees second. They understand that contentment and happiness in someone’s personal life can have a tremendously positive impact on their professional life.

So rather than just dumping a massive project on someone at the last minute, they ask questions to make sure that an individual has the bandwidth to take care of the request.

Similarly, plenty of leaders view subordinates as employees—and not as human beings. Instead of viewing each member of the team as a unique individual with dreams, aspirations, and feelings, these leaders instead look at them as pawns on a chessboard.

For example, in one story from the book, there was a company that needed to cut a number of positions due to budgetary concerns. Some of these people had 10 or even 20 years of experience under their belts. To “celebrate” their contributions, the company threw them a pizza party. There wasn’t any beer or Champagne. Only soda.

Now, pizza parties are great and all. And this tactic might work if your employees are teenagers.

But treating respected professionals like teenagers? A company has to do better than that.

Effective leaders understand this perfectly—which is why they always aim to understand what employees are thinking, what they’re going through, and what impact any changes might have on them. The best leaders put their employees first—always—and look at them as living, breathing people first and foremost.

If you’ve never come across the term before, here’s a brief definition: Tactical empathy is the ability to understand the perspective of someone else and demonstrate that you are aware of those feelings during your interactions.

Effective leadership is built on a foundation of tactical empathy—which starts with self-awareness. Effective leaders know the influence of their ego and authority, and they stick to sequencing to help persuade their teams to move in the right direction. By leading with tactical empathy first and stating your goals and objectives last, you increase the chances that the employee will buy in to your way of thinking.

On the flip side, when leaders don’t think about how changes or workloads are going to affect their teams, they can create toxic environments where nothing gets done.

You don’t hire people so that you have someone to boss around. You hire them because they’re good for the job and have the experience and skills needed to excel in the role.

Unfortunately, many leaders don’t understand this. As soon as they hire someone, they micromanage the hell out of them—which isn’t exactly the best way to motivate people. The worst thing you can do is bring smart, capable people into the fold and act as though they can’t execute without your input.

Effective leaders avoid this pitfall by prioritizing trust of the people they hire to do the jobs they hire them to do. They hire their employees, train them, and then get out of the way.

At the same time, they solicit feedback and listen to their team’s ideas—because they know that refusing to take feedback is the quickest way to create robotic employees.

To illustrate, During the first Gulf War, General Barry McCaffrey made sure that he included company commanders at the table each week when he met with the battalion commander. This way, he was sure that his team would get a small dose of leadership from a very senior officer on a regular basis. As a result, the team felt empowered because a superior officer was asking for their feedback and input. By including his team at the table, General McCaffrey boosted their morale and made them feel important.

Would you say that—as a leader—you demonstrate these four defining characteristics?

If not, then you probably want to work on developing these skills and habits. That’s the ticket to creating a team of committed employees who are ready to go to bat for you every day.