We’ve all worked for bosses who weren’t exactly inspiring. Whether an individual didn’t treat you with respect or berated you is beside the point. You didn’t operate at your full potential because you didn’t have the support or the encouragement you required to do so.

You don’t want to become one of those bosses down the road. As a leader, you’re committed to your team’s success. You want to help every one of your employees get to the next level. 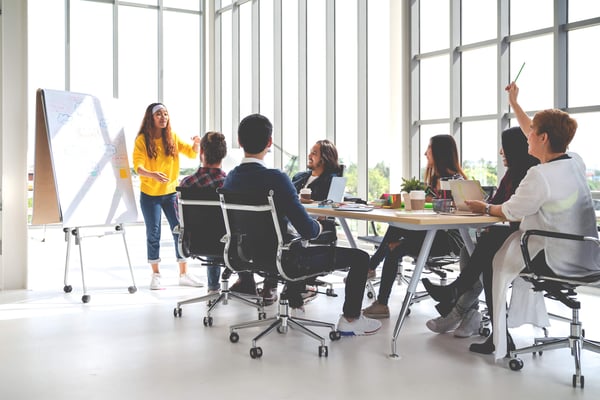 1. Being Transparent and Connecting with Your Direct Reports

Leadership goes beyond telling people what to do. Effective leadership is about connecting with the people you’re responsible for.

One of the reasons I wrote my book is that many organizations aren’t doing their best when it comes to connecting with people.  This connection starts with  your ability to be transparent. If you want to improve in this area, you first need to take stock of your ability by asking yourself a simple question: How good am I at being humble and honest?

No matter how good you are, you can always improve. Become more transparent by being authentic first—sharing insights into who you are to encourage your direct reports to do the same. You want your subordinates to believe that what they’re seeing in you is genuine—not an act. Show openness, humility, sincerity, and integrity to lead by example.

When you’ve done that, it’s time to put your Tactical Empathy skills to use, letting your team know that you see things from their perspective, with no exceptions. Tactical Empathy isn’t some touchy-feely technique. It’s a core talent that leaders need to understand and execute on.

Remember, knowledge without implementation is worthless.

Bring transparency, honesty, and trust to the office every day, making a conscious effort to use Tactical Empathy as a tool, and you’ll connect with your employees on a level you didn’t even know was possible.

The worst thing you can do as a leader is bring talented and smart people into your organization and then treat them as though they’re not able to execute or make decisions on their own.

The job of a leader is to select the best candidates, train them, and then get out of their way.

Leaders also need to solicit feedback from their teams on a regular basis. That doesn’t mean you need to act on it every time. But if you’re not soliciting input from your team members—the folks who support you—what message are you conveying? It’s an offensive one, because you’re telling them you don’t trust them, which is the easiest way to alienate people and create robotic employees who don’t think they have the authority to offer ideas or suggestions.

Keep in mind that you don’t have to ask for feedback in exigent circumstances but pulling an employee into your office to ask their opinion about a smaller matters can have a tremendous impact.

As a hostage negotiator team commander, I encouraged my team to speak their minds no matter how outlandish their ideas were—especially in the midst of a crisis. The time to know they have a problem with direction of a call-out is not after it’s over. It is too late then.  I needed to know in the moment, because something that they were thinking could have a positive impact on the outcome.   If leaders are involved in managing a crisis, and they’re not engaging their direct reports, then they’re damaging relationships—to the point that they may struggle to rebuild them.

Not asking for feedback is leadership negligence and stunts your growth. Engage your team, bring them in, and chances are you’ll learn something.

Being an avoider is a cardinal sin in leadership. Avoiding action can have a paralyzing effect on any organization’s forward momentum.

Why do leaders avoid action? In large part, it’s because they are scared of making critical and difficult decisions for which they can be judged.

And that fear is attached to the leader’s lack of self-awareness.

How do you overcome this problem? It’s easy: Stay genuinely curious. ABC-Always Be Curious. Stay in constant pursuit of getting smarter.  Understand that all of your actions matter, and govern them wisely. When someone says something that is going to trigger you, don’t lose your cool. When you stay curious, it’s impossible for you to get angry because you’re always trying to figure out what’s driving behavior.

Leadership is a high-pressure job. You have to have the wisdom to realize that a visceral reaction will likely result in saying something you wish you didn’t. And that starts with being self-aware.

Try to bite your tongue. Every now and again, human nature might cause you to say something you regret. When that happens, retract it immediately and get ready to eat crow.

Leadership is a we game—not a me game. Though the best leaders keep self-interest in mind, they don’t ignore the interests of their direct reports.

By their nature, leaders are ambitious. But ambition doesn’t have to be a bad thing. Leaders want their organizations to be the best in part because it’ll reflect favorably upon them. But bad things happen when their ambition trumps taking care of their people.

When leaders fail to understand the proper use of authority and power—when they’re motivated for the wrong reasons—it affects their decision-making, and not in a good way. They try to put themselves in situations where they look good—often at the expense of other people. When you behave in a narcissistic manner and believe you’re superior, you’re going to alienate your entire team. Overconfidence leads to disaster.

So keep your power and authority in check. Listen to your team and find out what’s on their minds. It’s the cheapest and most cost-effective concession you can make—and one that can pay tremendous dividends down the line.

If you like leadership lessons like these, you’ll love The Black Swan Leadership Guide. Check it out.