Negotiation Training: Setting Your Sales Team Up for Success

No one in sales wants to waste time ... because they can’t afford to.

This causes many salespeople to move into the problem-solving phase too quickly—paralyzing their prospects and making them feel trapped.

How do you strike the perfect balance? A little negotiation training can help your sales team know when it’s time to close ‘em. Let’s start that training today by learning three negotiation tactics that are used by successful sales teams.

Salespeople often forget that other folks do in fact know when someone is trying to close them. They can definitely feel it when you’re trying to make them say yes and lead them down a particular path, or get them to change their mind.

First things first: Be aware of your tendency to beeline toward the close from the outset.

The sooner you get caught up in the close, the sooner your prospects will begin to take note. Doing this too early creates an awkward tension that happens when someone feels pressured to say yes.

If a client feels you’re trying to push them down a certain path, they’ll avoid you, they’ll lie to you—and eventually—they’ll be done with you. And even worse, you’ll have wasted several days or weeks of playing games before getting to that point. 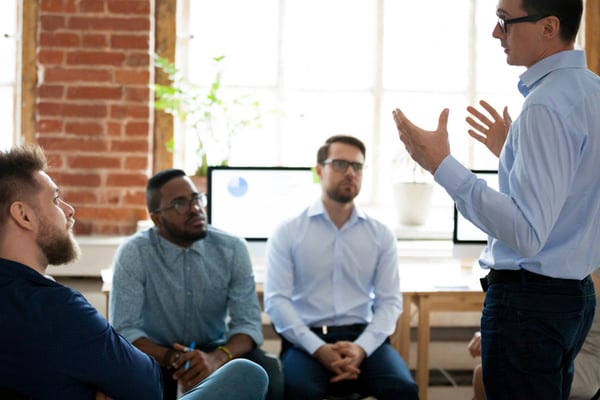 2. Go with discovery up front.

So, if we’re not trying to close up front, what are we trying to do?

The fact that someone is willing to talk to you means that they think you can solve a problem they have. As a salesperson, it’s your job to figure out what that problem is. Identify the problem, get the other side to tell you about the solutions they are already considering, and how they hope someone like you might fit in. If you aren’t getting the other side to express what they already had in mind before you began speaking with them, you are doing yourself a disservice.

Instead of getting caught up in the close, start off with discovery and try to find out what’s what. Here are three tools that will help you do exactly that:

3. Break your goals down.

In sales, your ultimate goal is always to close. But, according to HubSpot data, it takes an average of 18 calls to connect with a buyer. So even if you’re the most effective salesperson on the planet, odds are you’re not going to close a deal on your first call—or even your third.

By breaking your goals down into smaller increments, you can increase the chances that you’ll end up achieving your ultimate objectives.

What might this look like? First, you might set a goal of getting a prospect to tell you something no one else knows. Maybe you want to find out who the real decision maker is, or what’s going to be the biggest obstacle in the way of the sale. Next, you might set the goal of getting the prospect to see that there’s a potential painful loss they'll avoid if they buy from you.

Your underlying intention is still: How do I get them to close? You’re just not trying to summit the proverbial mountain in a single sprint.

These three tactics are a small steps down the path to negotiation mastery. Don’t forget to use proper inflection when delivering any of these skills to maximize effectiveness. If you’re looking for more in-depth training, consider spending a day with us at one of our negotiation seminars. Sign up for a live event, and we can almost guarantee you’ll be closing more deals in no time.