Negotiation Tactics to Use Over Email, on the Phone, and Face to Face

Whenever you interact with someone—whether it’s over email, on the phone, or face to face—they tend to remember two things about your encounter:

That said, different mediums of communication lend themselves better to different negotiation tactics. By letting those two ideas guide your negotiations and coupling them with medium-specific negotiation tools, you can become a more persuasive negotiator in any scenario.

Without further ado, let’s explore some different tactics and how they better lend themselves to email, phone calls, or in-person meetings. 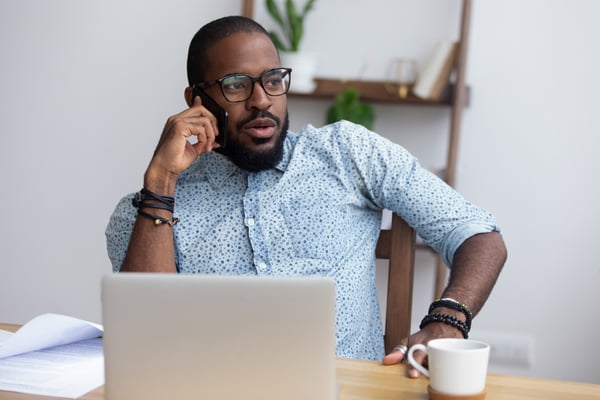 If there’s a golden rule of email communication, it’s this: Less is more.

Your ultimate goal for any email should be to drive the conversation to the phone or a face-to-face meeting.

Of course, in the age of smartphones and millennials, that’s not always possible. Some people just prefer to do business over email, and that’s perfectly OK.

When you’re negotiating over email, err on the side of brevity. You can’t put an entire accusation audit in an email and expect the whole thing to land on the other side. It’s more likely to feel like you’re droning on and on and elicit a feeling like Why are you making me read through this? from the other side.

Still, accusations audits can be effective in emails. You just need to keep them really short. Although you can get away with listing 10 or even 20 things in an in-person accusations audit, you’re better off sticking to two or three things over email.

But choose your words carefully. Your emails shouldn’t be longer than five sentences, and you shouldn’t ask multiple questions—one or two tops should do the trick.

Remember, the goal of your emails should be to move the conversation to the phone or face to face. That gives you more tools—like inflection, tone, gesticulation, and body language—to get more information.

To do this, ask a no-oriented question like this one: Would it be ridiculous for us to schedule a 13-minute meeting next week?

See that 13 in there? That’s intentional. There’s something about the way an odd number hits the brain that appeals to us. Whatever number you choose, make sure it’s less than 20 minutes. And when you finally get around to having that meeting, make sure you end it before time’s up. You want to condition the other side to understand that you will never waste their time.

If you put multiple moves in one email, what is your counterpart going to react to? People have the capacity to react to two or three moves at a time before they’re maxed out. When you give people too much to process in one email, they may very well go silent. They’ll glance at your novel and think, There’s no way I can absorb all of this and respond in any way that makes sense before moving on to the next thing.

A few final tips: Use email softeners to make sure that your message is received in a nice tone. Phrases like I’m sorry and I’m afraid can really help you eliminate the likelihood that the other side reads your message in an aggressive or hostile tone.

You’ll also want to pay attention to when you send your emails. Deliver good news on Friday and bad news on Tuesday. But never forget: Circumstances drive your strategy. There are exceptions to every rule.

Tactics for the Phone

Labels can be particularly helpful over the phone. If, for example, you say something that causes the other side to raise their voice a bit, you might respond with something like, It seems like I’ve upset you. Who knows how the other side will reply to such a statement? That’s the beauty of labels, though. You may not always like the reaction you get from your counterpart. But you’ll always be better informed because of it.

Chances are you begin most phone calls the same way virtually everyone else does: How’s it going? It’s tired and played out.

It’s an easy way to get to the meat of the conversation quickly.

The world of face-to-face meetings requires a different approach.

One trick you might want to try is to bring a notebook along and write things down as you talk. Introduce your notebook with some humility: Would you mind if I took out a notebook to take some notes? I’m too stupid to remember everything, so I write it down. Who’s going to deny a request like that? If anything, the other side will respect you more and open up because they know how much you’re paying attention.

Do your best to keep a personable look on your face—and try as hard as you can to avoid looking angry. Personally, I tend to listen so hard that I forget what to do with my face—and usually end up with an unpleasant look on it. If you’re like me, you may want the other side to understand that you’re predisposed to form such a countenance during a negotiation: Just to let you know, sometimes when I listen very intently, I have an unpleasant look on my face.

In-person meetings present the perfect opportunity to negotiate implementation. Let’s say you’ve just closed a deal. During a face-to-face, you can set some expectations for the other side: Just a friendly heads-up—you probably won’t like the documents you see. They’ll contain a lot of lawyer jargon and things you won’t understand.

When you lead with something like that, you become more trustworthy because you make sure the other side isn’t caught off guard. And that’s what leads to trust-based influence.  Do you want to be the person that always throws people for a loop? Get out in front of implementation by warning the other side of what to expect and allowing them to do the same for you.