Leadership Behaviors That the Experts Swear By

On the flip side, great managers have the ability to inspire their teams and encourage their employees to reach their full potential.

But what exactly makes a great leader?

Although there’s no cookie-cutter framework you can follow to become a great leader, here are five behaviors that effective managers engage in. 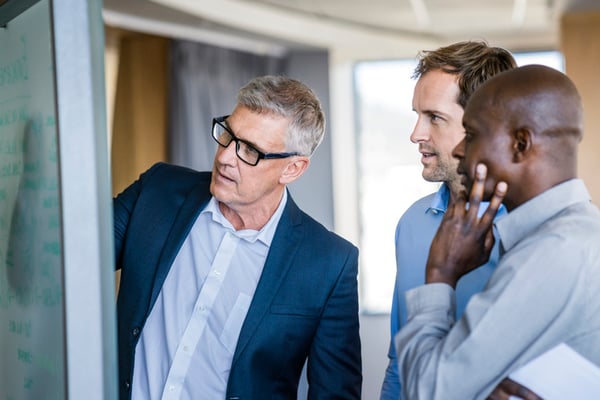 1. The ability to subordinate yourself to your employee

Anyone who’s ever had a boss who can’t see things from their perspective knows how uninspiring it can be. Unfortunately, despite the fact that 80 percent of employees say U.S. companies need to do more to develop empathy internally, only 57 percent of CEOs believe that empathy is critical to organizational success.

The best leaders have high emotional intelligence (EQ). They practice tactical empathy and subordinate themselves to their direct reports while at the same time adhering to the organization’s mission. Additionally, they also make sure that midlevel and frontline managers are empathetic to their teams too.

When a manager shows their workers that they understand their unique situations and know where they’re coming from, they form a deeper relationship with their teams—which increases employee engagement and, by extension, productivity.

Altogether, the ability to self-subordinate encourages employee input, produces hard work, and helps them to reach their full potential.

2. The ability to be transparent

Great leaders have the ability to connect with their teams on a more authentic level. They do this by being humble and being unafraid to expose their own shortcomings.

If you’re the type of leader who acts as though you can do no wrong, it’s time for a new approach.

When you admit your mistakes to your employees, you encourage them to take risks (within certain parameters, of course)—which can lead to breakthrough discoveries and new opportunities. You’re admitting that you don’t bat 1.000, and through that admission, you’re implying that it’s OK if they’re not perfect, either.

Compare that to the kind of leader who—despite the fallibility of humankind—presents themselves as incapable of making a misstep. That’s not the kind of person who inspires anyone.

3. The ability to go from an operator or technician to a leader

As I discuss in my book, one of the main reasons people get promoted is because they excel in their current position. A fantastic waiter, for example, might be asked to manage a restaurant because they know how to delight customers and drive more sales.

All too often, newly appointed leaders end up reverting back to the tasks they performed in their previous positions. Instead of leading subordinates and guiding them through projects and tasks, they start taking matters into their own hands. They do this because they’re uncomfortable in their new positions and perhaps haven’t received enough training.

The most effective managers understand that their roles have changed. Instead of operating in the trenches or becoming micromanagers, they lead their teams by giving them latitude to make most operational decisions on their own. These folks have mastered the transition from a doer to someone who guides people toward a winning outcome.

Under bad leaders, nothing ever changes—no matter how much training may be involved. And although these people might be motivated to get training or go to a conference to learn new things, they’re simply not motivated to execute the new behaviors that are based on those learnings.

This is in large part due to the fact that most people are lazy. Implementing new leadership concepts takes energy and effort, which is why most don’t engage. To phrase it a little more softly, most people are stuck in their ways and resistant to change.

Knowledge is nothing without implementation. The best leaders are able to implement things they’ve learned to continuously create a better environment for their teams.

5. The ability to practice inclusiveness

The best leaders understand that they’ve hired people to do specific jobs. Ostensibly, these are adults who have the skill sets, aptitude, and experience needed to thrive in the roles they’ve been given.

When I was managing my team of hostage negotiators, we were once called to a house where a man had just taken an ax to his Ford Explorer, which was parked in the driveway. Through the window of the house, we saw him with the ax on his shoulder and asked him to come out. He refused.

After a while, one of my negotiators, Jill, got him to a point where he was ready to come out. There was one catch, though: He only wanted to surrender to her.

Prior to this event, if you would have asked me if I would ever let someone surrender directly to a negotiator, I would have said no because that’s how I was trained. In this case I was confident in Jill’s ability to communicate and assess the threat level. Likewise, I was confident in the SWAT operators who were providing over-watch. Had I vetoed Jill’s idea, simply because I could, it would have damaged our relationship. After asking her whether she was comfortable cuffing the man herself, she gave me the thumbs-up, and the situation resolved successfully.

Effective leaders give direct reports a certain level of autonomy. In exchange, they instill in their teams an enhanced level of confidence—which produces stronger results.

Because you’re reading these words, you’re obviously interested in learning more about what you can do to become a great leader.

You’re in luck: I’ve written a book on effective leadership. Check it out and take your leadership skills to the next level.