To make it easier for new team members to get acclimated, cold-calling scripts might be necessary. Rookies need something to work off of after all.

But overall, the feeling toward cold-calling scripts is rarely positive. Communication should never be rigid, and sticking to a script can make things uncomfortable, or even awkward. While the idea might be well-intentioned, when we rely on a script too much, it ends up doing more harm than good.

That said, as long as sales still exists as a profession, people will be making cold calls. To get the best results, businesses and organizations need to make sure that their cold-calling approach is optimized and effective. Here’s how to do that. 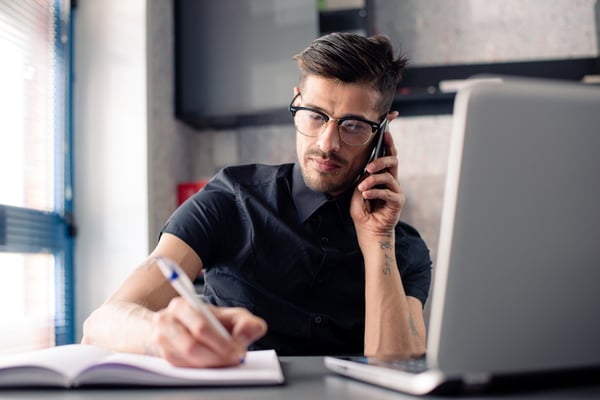 When they ran the script side by side with the previous version, the no-oriented script resulted in a 20 percent higher donation rate. The main takeaway: When you’re updating a bad cold-calling script, you’ll want to lean on the no-oriented side of questions. Asking “yes” questions during a cold call is a great way to make people uncomfortable. What’s worse is that we’ve all heard them before, gotten upset, and yet still do it ourselves.  Everyone has gotten the “Do you want to make more money? Don’t you want an exotic vacation? Am I speaking with...insert your name?”. We here at Black Swan want to make sure you don’t sound like the average snake oil salesman.

Sales teams, however, have traditionally been afraid of hearing the word no. But in many cases, people actually need to say no before they can commit because saying no helps them maintain their sense of autonomy.

Recently, a salesperson asked me a yes-oriented question: “Wouldn’t you want to have a professional help you through this situation?” The individual wasn’t prepared when I said no—so he hung up.

For the most part, we’re all wired to avoid conflict—if for no other reason than that it can be unsettling. When you ask yes-oriented questions that you already know the answer to, you give your counterpart an easy escape route that, in many situations, is too enticing to turn down.

When you’re revising your cold-calling script, it’s better to ask, “Do you disagree?” than it is to ask, “Do you agree?” It’s an easy way to let your opponent speak the honest truth without creating a conflict.

That’s how most cold-calling scripts start out. But no one really wants to start chatting with a stranger. When making cold calls, you should always introduce yourself first. If they don’t know who you are and you have their name, they might not want to speak to you.

So you need to introduce yourself. But how?

Think back to when you’d call your friends in elementary school. Channel the politeness of a young kid raised with good manners. “Hello, this is Billy, Kevin’s friend from school. Is he available?”

Once you’ve introduced yourself, other good questions to ask are, “Is this a bad time?” and, “Have I caught you in the middle of something?” These no-oriented questions allow the folks on the other end of the line to protect themselves and stay in problem-solving mode.

In most instances, when someone answers yes—“Sorry, I’m busy”—they will provide a solution. Now might be a bad time, but maybe they have availability later in the day. And even if they don’t offer a solution, you can still ask another no-oriented question: “Would it be a waste of time to schedule another phone call?”

As you fix your bad cold-calling script, think of it as a set of guidelines—not something you expect everyone on your team to follow verbatim. If you get too specific, you’ll get tunnel vision—which could blind you to obtaining other information that could help you during the call.

At The Black Swan Group, our end goal is always the same on cold calls. We want to hear what our clients and prospects have to say, and we want to schedule another meeting—particularly when it’s our first interaction.

This lets us be flexible. It also relieves pressure because all we’re expected to do is hear the other person out.

On the flip side, when you’re not actively trying to close, people appreciate that. When you’re hearing someone out, you’re not dominating the conversation—which is something you should avoid. Instead you are creating an emotional moment trying to build trust through a foundation of understanding instead of explanation and common ground. First calls are all about feeling out the other side.

What Your New Cold-Calling Script Should Accomplish

On the first call, your associates need to confirm your hypothesis. Do you see the problem the same way? Is the problem a top priority for the other side?

Instead of a script, give your sales team a list of skills to use: labels, calibrated questions, no-oriented questions, and accusation audits, which help address common reservations.

The order of a call is never set in stone. It needs to follow the conversation. Sales associates should go into a cold call with a list of questions or comments they want to interject. But they should say them only when it’s natural.

Be sure to put a time limit on your cold calls, too. Your prospect isn’t going to waste a huge chunk of their day chatting with you. And the last impression is the most important: You don’t want the other side to start thinking about how you’re droning on and on about something they’re only sort of interested in.

Make sure your prospect is off the phone in 20 minutes and you’ve got a good feel of their concerns during that time. When they believe you’re making the effort to understand them, there’s always going to be another interaction.

And that’s when you can close.