Communication at Work: How to Nail Your Elevator Pitch

By Brandon Voss | February 11, 2019 | Communication Techniques, How to Negotiate

I’ll be honest—I’m not a fan of the elevator pitch. The idea of preparing a 30-second sales speech in which you explain your idea or solution and why it’s valuable goes against every unwritten rule of persuasion. Although it’s intended to drum up excitement in a short window of time, this sales technique inevitably breeds resentment and rejection. 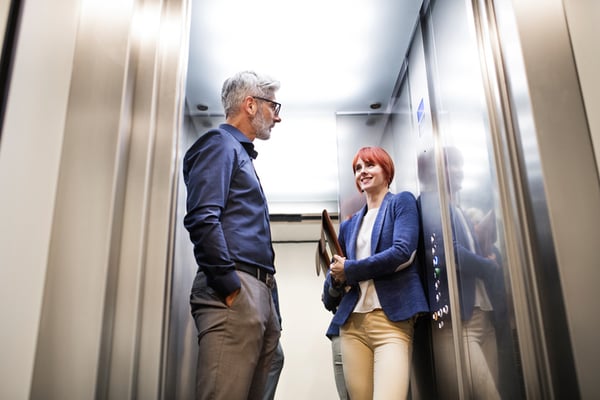 The Problem with the Elevator Pitch

The biggest issue with the elevator pitch technique is that it’s built on personal bias. When you pitch someone an idea without first attempting to understand them or establish a relationship, you make a handful of bad assumptions. You assume that they’re interested in what you have to say, that they need what you have to sell, that the conversation will continue, and that no one else needs to be involved in the decision.

In addition to those fatal negotiation flaws, the elevator pitch is founded on yet another bias—the belief that sales are a “numbers game.” In other words, if you give the same 30-second pitch to 10,000 people, it’s bound to land eventually ... right? If you want to win more deals, hoping for an anomaly isn’t a viable negotiation strategy. So why continue using a communication approach that alienates your prospects and has such a high failure rate?

Finally, the very idea of giving a sales pitch in an elevator is counterproductive. If you’ve ever been stuck in a tiny, enclosed space and had a stranger start talking at you, you know how inherently unwarranted it feels. In such an environment, there’s no escape from the conversation and no way to excuse yourself from the discomfort of the moment. This feeling of being trapped (both by the communication style and the environment) amplifies all of our negative emotional responses. Rather than internalizing what the other person is saying, most people switch into self-preservation mode and start counting the number of floors remaining until they can GTFO. Picturing a sales pitch succeeding in this environment does both you and your counterpart a disservice. If your communication technique doesn’t account for your counterpart’s emotional state and environmental conditions, you’ll never be able to influence their decisions.

Although the elevator pitch technique is flawed, the underlying desire to win someone over in a short period of time isn’t. Rather than preparing a long explanation, focus on the moment you’re trying to create. The end goal of any quick pitch is for your audience to leave feeling good about the interaction and open to continuing the conversation further. With that in mind, how might you alter your communication technique to bring about that moment?

The key to understanding and making your counterpart feel comfortable lies in letting them do the talking. Rather than presenting problems, solutions, or objectives as statements, consider how you might help your counterpart come to those realizations in an organic way. The best way to do this is by asking a calibrated or no-oriented question.

In a busy world full of small negotiation opportunities, no-oriented questions are your secret weapon. By structuring a question in a way that invites a “no” response (rather than fishing for a “yes”), you play into the human instinct for self-preservation and autonomy. Unlike the classic elevator pitch, no-oriented questions give your counterpart an emotional way out and the opportunity to correct you. Whether they agree or disagree, they’re made to feel more at ease and are encouraged to tell you why.

The best no-oriented questions are variations of negative labels. In other words, they’re designed to demonstrate empathy, absorb, and attack. Unlike labels, however, they also ask for something—be it someone’s time, attention, work, resources, and so on. To illustrate how this looks in action, take the following scenario:

Sally is teaching a college seminar on negotiation and wants to convince Chris Voss to speak to her class. When he comes to town for a book signing of Never Split the Difference, she knows that she has a finite amount of time to pitch her idea and win him over. To prepare, she’s taken a cold read and considered an accusation audit.  Realizing there are only seconds to influence, she decides to go with a “No” Oriented Question. As she approaches the front of the line and holds out her book, she says:

By starting the question with the phrase “how ridiculous of an idea,” she’s saying, I know this idea seems ridiculous. And in acknowledging that, she demonstrates an understanding of all the reasons why he might think it’s ridiculous and addresses the negative elephant in the room. In short, she’s saying: I know you’re busy. You have a lot on your plate. People are always asking things of you. You don’t know me. This isn’t what you were expecting. Feel free to turn this down. But this is what I’m asking you.

In a strange way, the no-oriented question is also meant to guide your counterpart’s thought process. By not asking too much of Chris and suggesting that he doesn’t need to think too much about his answer, Sally actually inspires him to do the opposite—to give her proposition more thought. On top of that, the simplicity of the question encourages Chris to lay out the terms rather than accept a solution. When he responds, he can tell her what he’s agreeing or disagreeing with and how he’d like the deal to work.

Our other favorite no-oriented questions include:

When communication falls short, it’s typically not due to a lack of effort or best intentions. More often, it’s because we lack emotional intelligence and are unaware of our counterpart’s perceptions. Rather than attempting to uncover what we don’t know, we make assumptions about what they want to hear and where they’re coming from.

Before you launch into your next sales pitch, remember that what you’re saying won’t be absorbed unless your audience is ready to hear it. By being emotionally sensitive to context, addressing negatives, and communicating in a way that creates a comfortable and open environment, you’ll create more opportunities for success.

For more game-changing sales negotiation tips and strategies, download our e-book on contract negotiation below.