Communication at Work: Are You Being Too Nice at the Negotiation Table?

When we’re faced with a difficult negotiation, many of us make the mistake of thinking that niceness will help us get what we want. To make ourselves seem more agreeable, we switch into an overly energized tone and take every opportunity to smile or nod enthusiastically—sometimes without knowing we’re doing it.

In some instances, this exaggerated display of niceness is considered a social courtesy. But if it continues beyond a few moments, being too nice can become a negotiator’s biggest weakness. In a dramatic twist of irony, the more nice you try to appear, the more insincere and two-dimensional you seem. Being too nice ultimately inhibits trust and leads to subpar deals. 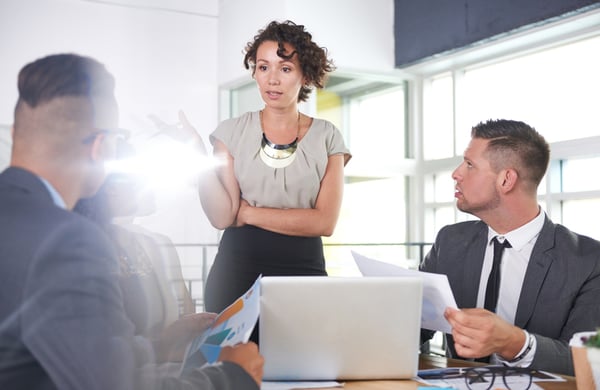 Problems with Being Too Nice

There are a variety of problems that come with being too nice in a negotiation. We’ve outlined the big five:

1. It can seem inauthentic.

The average person is so accustomed to niceness being used as a sales strategy that they interpret a smile or an overly friendly salutation as a trap. When someone is nice to you without any clear context or motive, you naturally assume that they want something from you—and you put up your emotional guard.

The second problem with niceness is that it encourages you to make assumptions about your counterpart. Most people rely on their own preferences and experience to determine what nice looks like. For example, if you’re the type of person who appreciates directness, you’ll probably be direct with your counterpart in an effort to be nice. If shooting the breeze before discussing serious matters puts you at ease, doing so with your counterpart may be your way of showing them that same courtesy.

But there’s a fundamental issue with this approach: It steamrolls your counterpart’s preferences and ignores their individuality. Don’t assume that your personal brand of niceness is also their cup of tea. If you don’t make an effort to understand your counterpart and treat them the way they wish to be treated, you won’t succeed in earning their trust and respect.

3. It’s not a precursor to likeability.

In a negotiation, being likeable can have serious payoffs. It can make people feel more comfortable in your presence and more willing to make a deal with you. Contrary to popular belief, however, being as nice as possible doesn’t automatically make you more likeable. Most people overlook the fact that there’s a fine line between niceness and likeability. In fact, it’s possible to like someone even if you disagree with them or have nothing in common.

More than any other quality, likeability is rooted in empathy and respect. There’s some truth to the saying that “nice guys finish last.” The truth is niceness and respect are difficult to balance. That doesn’t mean you should be hostile or rude—it simply means that there are more effective ways to reach your goal. Rather than trying to be nice, focus on exhibiting tactical empathy. Unlike niceness, the way you demonstrate empathy should change based on the type of negotiator you’re faced with.


4. It limits your negotiating possibilities.

When it comes to understanding what’s actually possible in a negotiation, we like to say that you don’t know what you don’t know. As you enter into a negotiation, there will always be things that you know you need to learn in order to make a deal, or what we call “known unknowns.” In addition to uncovering this information, a good negotiator will also make a point of identifying “unknown unknowns”—things they don’t know are up for negotiation until their counterpart reveals them.

5. It leads to subpar deals.

In an attempt to avoid conflict, many negotiators will ask “yes-oriented” questions (questions designed to elicit a “yes” response) that they already know the answer to. In addition to limiting your negotiation possibilities, these questions take away your counterpart’s “right to veto.” This inability to say “no” can threaten their autonomy and make them feel trapped—two things that dissolve trust and kill deals. When you’re too nice, you also increase your likelihood of getting a “counterfeit yes”—an ingenuine agreement meant to get you off their back.

On top of these challenges, being nice often takes the form of avoiding negatives—including potential negatives that may manifest during implementation. By failing to address these issues, you’ll create a deal that’s destined for failure. Furthermore, bending over backward or sidestepping negatives can breed feelings of inequity, distrust, and resentment—all emotions that deteriorate relationships.

Being Likeable Without Being Too Nice

Being likeable is all about making your counterpart feel safe, understood, and in control. To get them to that point, follow these three steps:

Identifying the type of negotiator you’re dealing with (Accommodator, Analyst, or Assertive) will help you understand how they want to be treated and what negotiation techniques will be most effective. For example, if you’re dealing with an Analyst, don’t be afraid to go silent to give them time to think. Rather than overwhelming them with questions early in the negotiation, use labels to draw out their thought process.

If you’re negotiating with an Assertive, on the other hand, it’s important to give them the opportunity to talk so that they feel in control. In this scenario, demonstrating understanding and asking calibrated questions can help you lower their guard and create a more collaborative negotiation environment.

For Accommodators, remember that the relationship comes first. With this type of negotiator, it may make sense to start by talking about something personal and unrelated to the deal. Accommodators tend to view silence as a form of disengagement rather than a welcomed opportunity to think, so it’s important to keep a steady conversation cadence.

The most effective negotiators are mindful of their counterpart’s perceptions and incorporate all three negotiation types into their communication approach.

Earlier, I mentioned that the best way to get your counterpart to define their boundaries and desires is by allowing them to say “no.” The most effective way to do so is by using no-oriented questions and mislabels (intentionally using a label that you know to be incorrect). Both negotiation techniques empower your counterpart to veto what you said and encourage them to tell you why (and thus reveal their unfiltered thought process).

To learn more about how to become a more persuasive and effective negotiator, download our e-book below.