The Black Swan Group is here to call “bullshit” on compromise—exactly as we did in our book. Here are two reasons why.

There’s an old saying that tells us that the person who offers to meet you in the middle is a poor judge of distance.

Cutthroat negotiators know to ask for way more than they want so that they can offer to compromise, meet you in the middle, split the difference, and end up where they wanted to be all along. Over time, they’ve learned that this approach will seem fair to you, and you will be happy and content with the outcome.

But they’re the ones getting what they want—not you.

For legitimate people, what really is fair will unfortunately never feel fair. 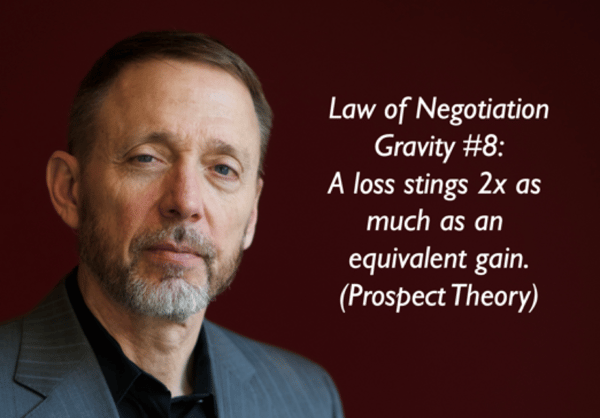 Daniel Kahneman won the Nobel Prize in behavioral economics for developing “prospect theory,” which describes how we make decisions when risk is involved.

As human beings, we are faced with what we call the Law of Negotiation Gravity #8:

A loss stings twice as much as an equivalent gain.1

It’s also why many underperforming negotiators tell us that a good deal happens when both sides are a little bit unhappy.

Really? Is that the key to long-term prosperous relationships?

While the spirit of the idea is a good one, the idea itself in practice is horrible. The trick is figuring out how to integrate the idea into your negotiations without relying on it exclusively.

Having the spirit of compromise often means you are willing to listen and explore options. This is a good thing: If you are actually listening and considering the merits of options, then this is part of the essence of great negotiation.

After all, a great negotiation is a great collaboration. It takes two parties.

Compromise as a lazy shortcut.

In reality, however, compromise is often a shortcut taken so that parties don’t have to engage in great negotiation.

If I have an idea for a good term in a negotiation and you have a different one, we might be tempted to “compromise,” and take parts of both ideas. But in reality, what we have done in such an instance is dilute both solutions so that neither is likely to be effective.

Do you see it now? You have to be very, very careful with compromise.

You also have to aware of making poor tradeoffs as a compromise.

Occasionally, you will subconsciously be willing to give in or compromise on an issue when you know you have taken advantage of your counterpart on another issue, even though the terms may deal with unequally valued commodities.

When you make tradeoffs, be cautious of trading unequal commodities until you have calculated the implications. Know if it’s apples to apples, as the saying goes, unless you have intentionally chosen to go in a different direction. 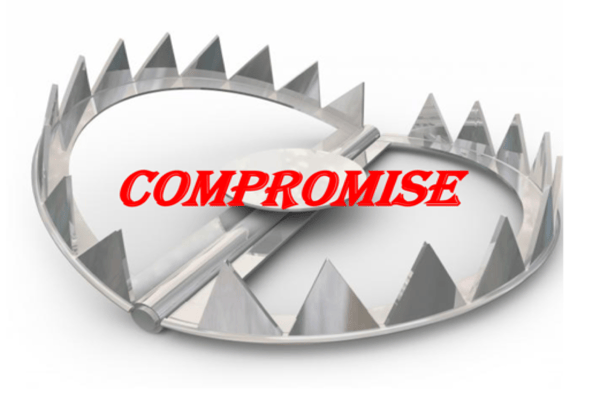 Compromise is a tool of the cutthroat negotiator.

Most people actually want to be fair (the F word), and that is what the spirit of compromise is all about.

But you need to be aware of what you are being fair in relation to, and ensure that fairness is a two-way street, rather than a word that is manipulating you.

If someone is inviting you to compromise, you should also be aware that it is frequently the sign of a cutthroat negotiator.

The person who has perfected the “I’ll meet you halfway” strategy just asked for more than they wanted to begin with. (Try a mirror here: Meet me halfway?)

These cutthroat negotiators make up a minority of the counterparts you will encounter (roughly 25 percent of them, by our estimate). You can identify them when they ask you to compromise as a means to get you to give.

“What are we trying to accomplish here?” is always a great question to refocus your counterpart on when you feel you’re being pulled into the compromise trap.

You can also have success with this one: “Seems like that may not accomplish ... anything?” (Try this label, followed by a hesitation and then an upward inflection of genuine curiosity on “anything.”)

Whatever you do, avoid the compromise trap. It usually seems far more alluring than it ever really is.

1 From the Nobel Prize in behavioral economics-winning book “Prospect Theory,” by Daniel Kahneman. Further reading in Professor Kahneman’s book Thinking, Fast and Slow.  More information and another perspective on Professor Kahneman and his partner Amos Tversky in Michael Lewis’ book The Undoing Project.