Getting You From Rapport To Influence 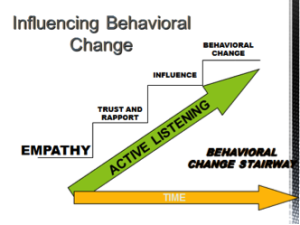 We have written about the importance of active listening to demonstrate empathy in order to establish a bond or rapport with the other side of a difficult conversation. But, not much has been said about techniques that can help us move from rapport to influencing behavioral change. Whether business or crisis negotiations (to some there is no distinction), behavioral change is our ultimate goal.

Influence is the power to cause change in thought or action. How is it done? First, we should have a good working knowledge of Dr. Robert Cialdini’s Principles of Influence. There are plenty of resources out there that speak to this subject so I won’t go into detail but suffice it to say that a firm understanding of the principles will make you better at transitioning from rapport to influence. Marrying your understanding of those principles to specific verbiage will make you more successful.

Tagging is adding a short question to the end of a statement. For example, “John, getting the help you’re looking for and seeing your kids again are both things you really want, aren't they?” We use these close-ended questions used to illicit agreement and support logical arguments.

Leads are those questions that make assumptions about pre-destined facts and therefore often the answer. “Before you decided to take this action, what other options did you consider?” This open-ended questions allows a freedom of response providing an opportunity for the other side to formulate their own alternatives or options.

Conditional statements/questions are used to presume something is going to happen, at the same time allowing the other person a chance to explore options without fully committing. “It sounds like you are not ready right now but when you do decide, will you do X or Y?” Forming the question in this manner gives them the illusion of control by appearing to offer them a choice. I say appearing because we have painted them into a corner to make the choice, but it looks like their idea. Using “if” or “when” subconsciously implants that it is a forgone conclusion that they will do “X” or “Y”.

Partial Agreements with a Public Promise are used to induce “agreements” to consider an act that can be revisited later in the conversation. “Promise me that you will…”fill in the blank. The key is to get them to verbalize the promise. When possible get them to say, “I promise I will…”

Buy Signals are verbal and non-verbal signals that people give which indicate a willingness to accept another’s position, accept a situation or indicate a decision has been made.

These are usually evident questions posed by the other side. If you can spot them, you can exploit them. “What will happen if...” “Can you guarantee...” This is an indicator they are less certain of their beliefs or position.

It goes without saying that these advanced communications techniques are most effective after we have listened for emotions and identified issues attached to their argument. What is the frustration, anxiety, despair, betrayal, that is driving the argument? Often these are illogical but, they are certainly a part of what they are trying to express. Emotions impede rational thinking therefore, we must return the person to the NFL (Normal Functioning Level) before we can influence a change in their behavior.